What happens after a DUI with an accident in Rhode Island? 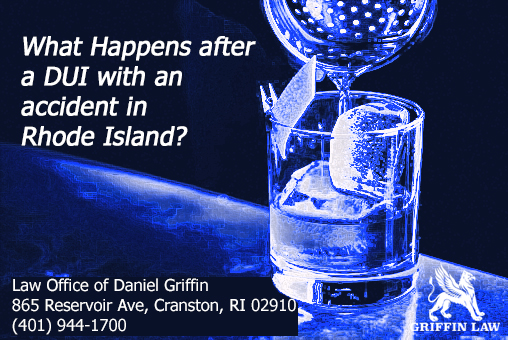 I got a DUI and caused an accident- what should I do?

Get a lawyer as soon as possible.

Car Accident and a DUI

DUIs are taken very seriously in all states, but the laws surrounding a DUI in Rhode Island are unique to that state. Regardless of the location of the arrest, a DUI is always based on the driver’s behavior and blood alcohol concentration, or BAC, levels. However, police can use their own discretion when determining a driver’s level of impairment, especially if that driver is underage.

In general, a DUI occurs when a driver’s breathalyzer test results in a .02-.08% BAC. Basic DUIs are usually considered misdemeanors, but things can become more serious if the incident involves an accident. Charges can quickly escalate to a felony if the accident causes bodily injury, property damage, or death. At that time, proceeding without a knowledgeable RI DUI lawyer is very unwise.

In Rhode Island, operating a motor vehicle means you are giving implied consent to the state. This sort of consent means you agree to have a chemical blood alcohol content test administered if it’s requested by the police. If that test determines your BAC is at or above the state’s limits, you will be immediately charged with a DUI. Also, if said test is administered at a crash scene and your BAC is found to be at or above the legal level, you could face felony charges.

NOTE: If there is an accident involving bodily injury or death, law enforcement agents can deny your right to refuse the test and force you to submit a chemical BAC.

Regardless of the circumstances, a BAC test is sometimes still refused. However, drivers should understand that refusing to honor implied consent could result in harsher penalties. If you refuse to take a BAC test, you could face numerous consequences. These include arrest, loss of driving privileges, and stricter sentencing. In general, the following occurs if the driver refuses a BAC test under the state’s Implied Consent laws:

Fortunately, penalties are slightly less stringent if it’s your first offense. However, sentencing is subject to the judge’s discretion and circumstances of the accident. Therefore, hiring a reputable Rhode Island DUI lawyer can help you reduce the penalties incurred in your case.

NOTE: In some instances, there are other penalties enforced besides those listed above, including but not limited to the installation and required us of mandatory ignition interlock devices, or IIDs.

What to expect when you cause an accident

Because Rhode Island legislature is aimed at discouraging drunk or impaired driving, especially when it results in an accident; DUIs that injure another person or damage property are dealt with very severely. An experienced RI DUI attorney can help lessen the penalties and restrictions therein. However, numerous factors are considered by the courts. Be prepared to: face felony charges, lose your driver’s license, spend time in jail, attend several rehab classes, and pay steep fines.