DUI when under 21 in Rhode Island 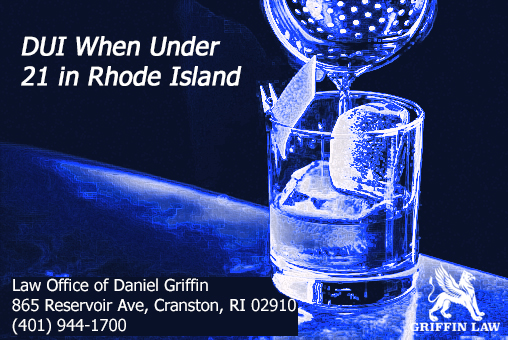 You are in big trouble. Get a lawyer now.

Being charged with a DUI in Rhode Island is serious, but the way in which the law works can change quite a bit if you’re under the age of 21.  While many people have admittedly tried alcohol at some point before reaching the legally required age, some important factors should be considered before doing so. This is especially true for those deciding to drive after drinking.

NOTE: In Rhode Island, getting a DUI is not exclusive to drinking alcohol and driving. Citizens can be charged and convicted of a DUI for driving under the influence of drugs as well.

The laws pertaining to DUI are different for people below the legal age of consumption. However, penalties are still harsh and usually require the help of a Rhode Island DUI lawyer. In most states, an underage DUI occurs when a 20-year-old or younger driver has a BAC of 0.02. On the contrary, some states with a zero-tolerance policy can charge a person, regardless of his or her age, with a DUI despite having a BAC that is below 0.02.

Rhode Island has enacted a use/lose law aimed at discouraging its citizens from purchasing, possessing, and/or consuming alcohol while underage or behind the wheel of their car. The law imposes restrictions on individuals under and over the age of 21, but the use/lose law is not discretionary. In fact, it is mandatory for all ages. Ask a knowledgeable RI DUI lawyer to help you understand how it will affect you.

DUI When You’re Under 21 in Rhode Island

Although each state has its own restrictions, mandatory use/lose laws, and legal ages for consumption, living in Rhode Island means you must follow the rules of the state while inside its borders whether you’re a resident or not. Since the laws are sometimes difficult to understand, hiring a DUI lawyer in RI such as Daniel Griffin of Cranston might be your best bet.

Regardless, drivers under 21 years of age with a BAC of just 0.02 usually face the same charges and penalties of older drivers with a BAC of 0.08. Unfortunately, this law does not require the driver to exhibit visible signs of impairment. Essentially, an underage driver could get pulled over for something different and, if asked to submit to a breathalyzer test, be arrested for a DUI without ever having driven dangerously.

Any experienced Rhode Island DUI lawyer will reference code 31-27-2.7 when handling an underage DUI case. It states that a driver between the ages of 18 and 21 will be considered impaired and subject to penalty under two circumstances: 1) a breathalyzer test shows the driver’s BAC is at least .02%, and 2) that same breathalyzer test shows a BAC of less than .08%. Put simply, driving after consuming alcohol and being under the legal age is a risky decision that could land you in jail regardless of your ability to drive safely.