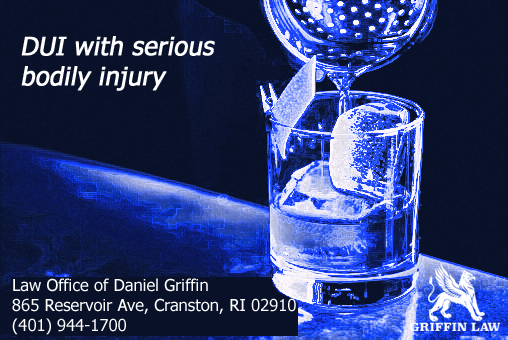 I got charged with a DUI and there was serious bodily injury. What do I do?

You are in serious trouble and need to contact a DUI lawyer immediately.

What Bodily Injury Means for Your DUI Case

To understand the legal consequences of a DUI with serious bodily injury, look at current Rhode Island DUI laws. Every state has its own laws. If you’ve been charged with this offense and you live in Rhode Island, your best defense is to retain effective and experienced legal counsel; especially an expert RI DUI lawyer.

In Rhode Island, first-time and second-time DUIs are typically classified as misdemeanors, while third-time DUIs (all of the DUI charges must happen in a five-year time frame) are categorized as felonies. As you probably already know, felony crimes are much more serious and convictions for felonies feature legal punishment which is much more severe.

Your Charge May be a Felony

It’s extremely possible for a DUI with serious bodily injury to be classified as a felony. Whether it is or isn’t will depend on the particular facts of the case, as well as your own criminal record. When a DUI is a third offense and you are convicted, you may be in line for a year to three years in jail. How much jail time you receive when you are convicted will typically depend on your blood alcohol concentration at the time of the third DUI offense.

Since the DUI caused serious bodily injury, you will face additional jail time. If someone was killed due to your driving under the influence, you will receive up to fifteen years in prison if you are convicted. You may also be fined five thousand to ten thousand dollars and lose your driver’s license for five years. To prove this type of charge, the state must establish that your impaired driving was the proximate cause of death. The DUI itself must also be proved.

For serious bodily injury, prison time after a conviction usually ranges around ten years. The person who is convicted may be fined one thousand dollars to five thousand dollars. The convicted person will also lose his or her driver’s license for up to a couple of years. Bodily injury is defined as an injury whereby the injured party is at substantial risk of dying. Injury which triggers severe physical disfigurement may also be defined as bodily injury, as may protracted impairment or loss of function in a body organ or member.

You need to hire a Rhode Island DUI lawyer to help you with this serious charge. Your attorney should have years of experience with DUI cases. If you’re located in Rhode Island and you want to hire legal counsel, call The Law Office of Daniel Griffin today. Attorney Griffin’s office is in Cranston, Rhode Island. He understands DUI and bodily injury laws in the state, as well as all legal tactics which may be utilized in order to help his clients get their charged dropped or reduced. Call NOW!