DUI Without a Sobriety Test 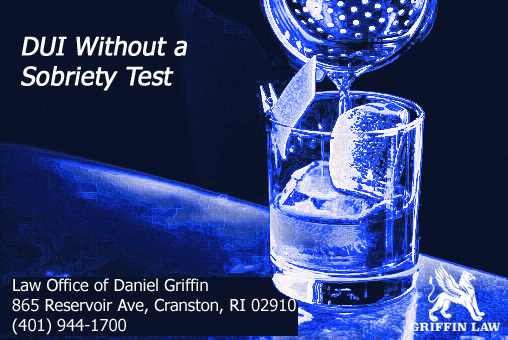 I got a DUI without taking a sobriety test- what do I do?

You are going to have a tough time in court because the facts and police report for your case are most likely very subjective. You are also probably facing a mandatory suspended license right off the bat. Get a DUI lawyer.

You may or may not have the right to refuse to take a sobriety test when a police officer pulls you over. Each state has different laws regarding sobriety tests. Police officers will do single tests or multiple tests in order to determine whether or not drivers are under the influence. The first one performed is likely to be the “field sobriety test” if you comply with the request.

Should You Refuse to Take the Test?

You may panic when you’re pulled over and decide not to take a field sobriety test or breathalyzer test. Be aware that certain states have “implied consent” regulations. These laws mean that you may have consented to taking a breathalyzer just by driving in the state. Rhode Island is a state where implied consent is the law.

In addition to breath tests (and urine and blood tests), law enforcement have a range of methods they use in order to determine how intoxicated drivers are.

If you refused to take a breathalyzer test after being pulled over by a police officer in Rhode Island, we strongly recommend hiring a DUI attorney as soon as possible after your arrest.

Do You Need a DUI Attorney?

If you need a DUI lawyer in Rhode Island, call The Law Office of Daniel Griffin today for your FREE legal consultation. Attorney Daniel Griffin will help you to build the strongest case and get the fewest penalties, even if you’ve refused to take a sobriety test.