When is your license suspended after getting a DUI? 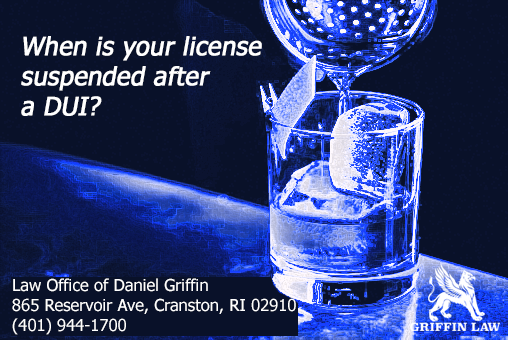 When does your license get suspended after a DUI?

Your license is suspended after you’ve been arrested for a DUI.

As one of the most common consequences of being charged and convicted of a DUI, losing your driver’s license is extremely inconvenient. However, it is one of the least problematic outcomes of such a serious traffic violation that often creates damaging effects to your personal and professional life. Still, understanding how and when your driver’s license is likely to become suspended can help you avoid further charges and fines.

In Rhode Island, a person who is merely charged with a DUI will not immediately lose their driving privileges. It is only when the driver is convicted of the crime that their license is up for grabs by the state. If your driver’s license becomes suspended after being convicted of a DUI in Rhode Island, the local DMV will require you to complete numerous requirements to have them reinstated.

The length of time your driver’s license is suspended will depend on several factors pertaining to your case, including but not limited to the following:

•            Whether you damaged property and/or caused bodily injury or death

A knowledgeable Rhode Island DUI lawyer can help you understand and effectively navigate the complicated process of being charged and convicted of a serious traffic violation. In general, however, the timeline of events is as follows:

•            The Rhode Island Department of Motor Vehicles (DMV) will then issue a suspension notice via mail, with details concerning the duration of your suspension, reinstatement requirements, and any hearing requests that are needed by the state.

Typically, the suspension of your driving privileges is effective immediately after being charged with the crime. Note that you may be required to pay additional fines to the state. These are separate from those fines imposed by the DMV. Furthermore, you may also be required to obtain an SR-22 through your car insurance company before your license can be reinstated. To receive personalized information about your driver’s license suspension, either consult with your RI DUI attorney or call the state’s DMV Operator Control hotline directly.

Tips for Getting Your License Back

Depending on the circumstances of your license suspension, getting your privileges reinstated may be expensive and complicated. An experienced Rhode Island DUI attorney like Attorney Daniel Griffin of Cranston can help, but in general, you will need to satisfy court and DMV the following requirements before the possibility is even considered:

Keep in mind that you will receive registration information in the mail pertaining to any education or treatment program requirements. Also remember that obtaining an SR-22 through your car insurance company after being convicted of a DUI is often more expensive than simply obtaining proof of insurance without one. Be prepared to pay different amounts depending on your unique situation and driving record.