What kind of charge is a DUI? 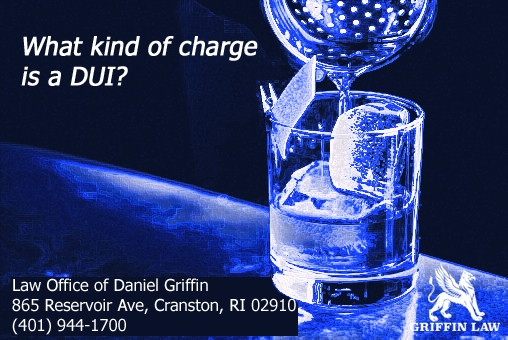 What kind of charge is a DUI?

The kind of charge a DUI is, depends on the your specific situation. The higher your BAC, or the more harm you cause, will bring much more tough penalties. The type of machinery you are operating while under the influence is also taken into consideration.

For many, a DUI is something that they wish to avoid and most people take precautions to prevent and minimize the risks associated with driving under the influence. States across the USA have severe and harsh penalties for those found driving under the influence which can result in fines, having your license revoked and even jail time. There are several categories of DUI and each has its own sets of punishments and penalties associated with it. The offence of DUI in Rhode Island can result in conviction leading to the loss of your license and a good DUI lawyer can help you.

Drunk Biking: The majority of people do not know that riding a bike while under the influence of drugs or alcohol is an offence punishable by law. When people think of a DUI situation, they will think of motorized vehicles but in fact, any type of vehicle be it motorized or manual can attract a DUI charge.

Felony DUI: A felony DUI happens when a driver is convicted with another incriminating factor involved such as driving on a withdrawn or cancelled driving license or while there are minors in the vehicle with them. A felony DUI can attract harsh punishments compared to a single offence.

Commercial DUI: This occurs when a driver is convicted of being drunk or high while working. This is especially true for haulage trucks and drivers of public transport such as trains, busses and minicabs.

Driving Under the Influence

Driving under the influence can involve either alcohol, drugs or both. In fact, even prescription medications could land you in trouble if they are known to cause dizziness, lethargy or tiredness. While the laws vary from state to state, Rhode Island is particularly strict when it comes to DUI offences. If you find yourself being detained in Rhode Island due to being drunk or high behind the wheel then you will need an excellent DUI lawyer who understands the workings of the legalities involved. One of the best DUI lawyers in RI is attorney Daniel Griffin who has the experience and means to get you through this very worrying time. If you are arrested for the offence of driving under the influence it is important to remain calm and seek professional legal help as quickly as possible. The longer you leave seeking legal assistance, the more likely you are to face tougher punishment.

A DUI Affects Your Job

Most people who are charged with a DUI are first time offenders and the arrest will lead to their first time dealing with the judicial system. While many people think a DUI is a definite sentence or fine, in the majority of cases the charge is dismissed and most will plead to a lesser or reduced charge. When looking for a DUI lawyer in Rhode Island, you want one who can prevent you losing your license by gaining a granting of a hardship license in certain situations. A hardship license comes with conditions and normally allows the driver to legally drive to their place of employment or education for a period of up to 12 hours a day. This is an absolute necessity for those who rely on their car for getting to and from work or school. Daniel Griffin often achieves positive results that will allow his clients to drive to and from work and school regardless of whether you are charged with drunk driving or being high behind the wheel.

There are various ways in which a defendant can win a DUI charge as the prosecutor must jump through many hoops to prove your guilt. On most occasions, there are certain hurdles that the prosecutor can’t overcome and this is where a Rhode Island DUI lawyer can make the difference between winning or losing your case. The best lawyers will take advantage of any weaknesses or discrepancies in the prosecutor’s cases and then use them to get positive results, including dismissal or a minimizing of the charges brought against you.

When You Are Arrested For A DUI

If you are arrested and charged with driving while under the influence of alcohol, the arresting officer will first need to obtain a breathalyzer or blood test to confirm that you are indeed driving while drunk. There is a commonly misheld belief that failure of a breath test will end with an almost certain loss of your case. An RI DUI lawyer can win your DUI case regardless of the outcome of your breath test with the use of various defenses. Some of the common defense used are: Illegal stop by the police, the standardized field sobriety test was wrongly administered, the arresting officer is not certified to perform a DUI test and failure of a confidential phone call being given after arrest. The best RI DUI lawyer will take care to carefully analyse the case before putting together a successful defense that takes specific facts and your circumstances into account.

Driving under the influence of marijuana, narcotics, prescription medication and alcohol in Rhode Island can lead to prosecution with severe punishment if you fail to seek professional legal help as soon as possible. While the whole process may seem daunting, a good DUI lawyer can help you fight your case with as little impact to your current personal situation. The best DUI Lawyers in RI work with you, not for you, and finds ways to minimize any punishment you may be looking at. With the correct help from a lawyer who has expert experience in the field of DUI’s, you will have the best chance to quash any sentence you are up against while being able to retain the right to drive. Don’t leave it too late to arrange a lawyer as the sooner you are advised on what to do, the sooner you can look to getting your life back on track.

Marijuana can attract the same punishment as being drunk behind the wheel as the THC in the drug can impair your driving skills leading to a reduction in reaction times, driving faster or slower than is allowed, and making you less aware of your surroundings. If you are a user of medical marijuana then you should not be driving while using the drug. Although medical marijuana can contain less of the active ingredient in the drug, it can still drastically impair your driving and make you a danger to other road users and pedestrians. Drinking while driving is a criminal offence and you can be arrested for carrying open alcohol in the vehicle, regardless of whether you are consuming it at the wheel or not. If you are pulled over by the police and made to take a breath or sobriety test you can decline, but this will most likely result in your arrest before undergoing a blood, urine or breath test at the station.

If you are facing charges in Rhode Island then seek out Daniel Griffin who can help you work on a plan of action before going to court. Of course, it is better to avoid a DUI at all costs and prevent yourself having a criminal record. It can be a very scary period in your life if you are caught, so the best plan is to not commit the crime in the first place.