Which Is Worse – DUI or Reckless Driving? 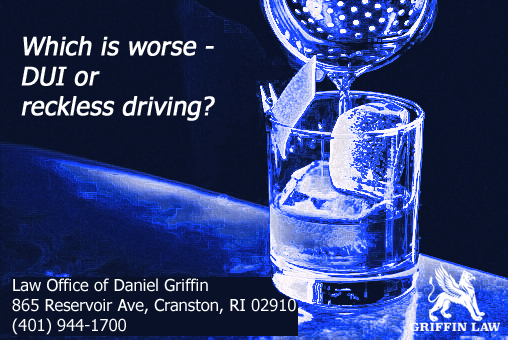 Is DUI or reckless driving worse?

A DUI charge is more serious than a reckless driving charge.

What You Can Do

As a Rhode Island DUI lawyer, many people just like yourself depended on me – and won.

After you’ve been charged with DUI, I’ll figure out if you’re a good candidate for getting your charge reduced or dismissed. Whether one of these options will be suitable for you will depend on evidence for your case, as well as the specific circumstances of your case.

While reckless driving is also serious and may result in penalties, the punishment for this type of offense is generally a lot less severe than the penalty imposed after a DUI conviction.

Jail time is possible with both offenses. However, quite frequently, people who are convicted of reckless driving do no jail time at all. In contrast, a DUI conviction may result in up to one year of jail time.

As well, when people get convicted of DUIs, they usually need to spend time in jails for two or three hours, right after their arrests.

With reckless driving, the person who is charged will typically receive a ticket and then be allowed to go home. The person may drive him or herself home.

Do You Need Help with a DUI?

A third DUI conviction will be a felony crime which may result in jail time and the loss of a driver’s license. The State of Rhode Island is hard on drunk drivers because drunk drivers threaten public safety.

If you’ve been charged with a DUI, you need a DUI attorney who understands Rhode Island drunk driving law inside and out. Without a great attorney fighting your corner, you may get convicted on your charge and you may receive the harshest penalties.

Have You Been Charged with Reckless Driving?

People who’ve been charged with reckless driving also need great attorneys who specialize in handling reckless driving cases. When I represent you, you will find that battling this charge is a lot easier.

My strong track record in court proves that I get results for my DUI and reckless driving clients, so call The Law Office of Daniel Griffin and schedule a FREE legal consultation today!