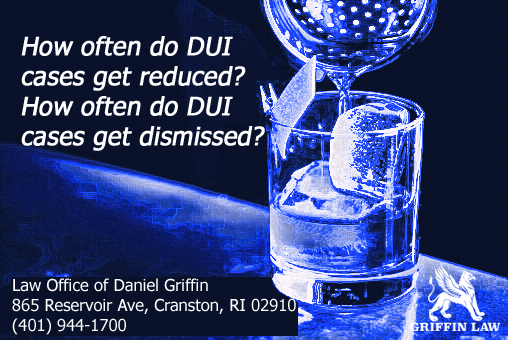 How often DUIs are reduced or dismissed is not really quantifiable. The result of most cases depends on the quality of representation and the facts your lawyer has to overcome. The most ideal approach to get the best result is: hire a DUI lawyer to defend you and spot holes in the State’s case against you.

Truth be told, experienced DUI lawyers “win” most cases for first-time offenders when there is no proof of an accident or terrible driving.

The expression “win” is in quotes here on the grounds that win may mean having the charge lessened to an alternate offense or generally getting a plea deal that prevents a conviction. Like most court cases, when fighting DUI and DWI charges, the best thing a lawyer can accomplish for a person is to arrange a plea deal; a less serious charge that comes with less serious punishments.

However, as a result of dropping a DUI arrest to a less serious offense, a driver will then consent to enter a guilty plea to the lesser charges in court. Realize that the judge won’t effortlessly consent to lessen your DUI charges, notwithstanding for a first-time offense. This is because new laws for drunk driving (and the general public opinion) have expanded in seriousness in each state. Numerous prosecutors are influenced to seek a full conviction under the costly new laws.

This is the reason the prosecutor will require a strong motivation to reduce the charges. An aggressive RI DUI lawyer will know how to fulfill this in the wake of evaluating the facts of interest. A talented lawyer will know how to discover the shortcomings in the case the prosecutor has, which will open them up to the thought of a plea deal. This can fundamentally lessen the charges against a driver from the serious offense of what they were initially confronting.

The recipe for success is to research comprehensively. Interview and disclose all information to your Rhode Island DUI lawyer and move the case forward; utilize evidence and procedural movements skillfully; and display an effectively thought out, choreographed trial with expert witnesses, character witnesses, and other time tested strategies for a strong defense in criminal cases.

My experience with DUI as a prosecutor

As a previous prosecutor, I manage DUI cases every day. When I worked under the Attorney General, I assessed all my cases and realized that each case is distinctive and that not each case was a good case for the State.

Now and then, the state is confronted with evidence issues. For example: a breath test machine that was breaking down or a defendant with a low blood alcohol level. Different cases included proof that was corrupted by police misconduct. For example: an officer making the person stop without reasonable justification, an awful DUI checkpoint, an officer who did not read the Miranda Rights, or when an officer unlawfully stopped the individual and kept him/her without reasonable justification.

In cases like these, the state will take a look at the law and frequently lessen the charge instead of dismissed by the court.

Another way cases are lessened is by attacking the field sobriety tests a person is asked to perform. Ordinarily, a person does well on these tests and passes them. However, they are for some reason still arrested for DUI (that is why you should what to do when you’re pulled over). In these circumstances, it is critical that the attorney takes a look at the video and highlights how well his client performed to the prosecutor.

It is possible to get your charges lessened or dropped

While understanding the individual performed well on these tests, the state lessens the charge to reckless driving instead of going to trial. These tests are extremely troublesome considering the conditions you are under when you are asked; practically difficult for the average individual. Consequently, when somebody looks great while doing these tests on video, it is exceptionally rare for the state to demonstrate that the individual was driving under the influence. Since the state has the burden of proof, they regularly lessen the charge.

Reducing your DUI case to reckless driving is certainly a lot better than a lawful offense.

The first action you need to take in order to get the charges lessened or the case dropped is… contact a DUI lawyer. This is your first line of defense. The initial consultation is free.