How Long Is a License Suspended for a DUI? 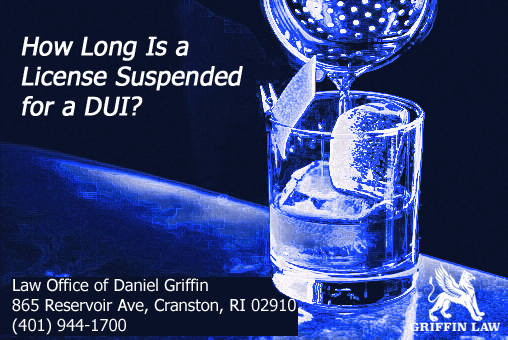 How long will my license be suspended for a DUI in Rhode Island?

The duration of a license suspension for a DUI will depend on whether it’s a 1st, 2nd or 3rd offense. Also, it will depend on the judge for the case, as some judges dole out harsher punishment than others.

Generally, in Rhode Island, these cases are tried in District Court and judges preside. There is rarely a jury, but there can be judge and jury for certain cases.

How to Avoid DUI Penalties

As you can see, the penalties may be harsh and we haven’t even discussed jail time, fines and criminal records. The best way to avoid the harshest penalties is to hire an experienced RI DUI attorney as soon as you are charged with Driving Under the Influence. Great attorneys often attempt to get DUI charges reduced to reckless driving (which has lighter penalties). Attorneys may also try to get DUI charges thrown out completely.

If it’s not possible to reduce charges or have them dropped, an attorney may arrange a plea bargain. If the case does go to court, an effective DUI lawyer in RI with an impressive win-loss record will be your best defense against harsh legal penalties, including a long license suspension.

How to Find the Right Attorney

You’ll need to hire an attorney who is licensed to practice law in your state, via the State Bar Association. As well, you should look for a lawyer who lives close to you, so that you’ll be able to attend face-to-face meetings when you need to, without needing to travel. One of the most important things to consider is the legal specialty that an attorney has.

Your attorney should be a DUI attorney, who defends clients that are up on DUI and reckless driving charges every day. When you choose an experienced DUI attorney, your attorney will understand every aspect of complex Rhode Island DUI laws. The importance of choosing the right DUI attorney can’t be over-stressed.

A good attorney will also be able to help you if you want to get your license back after it’s been suspended. This process requires an attorney.

To find out more about DUI laws in Rhode Island, and to get practical assistance with your DUI problems, contact Attorney Daniel Griffin today. Attorney Griffin is the head attorney at The Law Office of Daniel Griffin, which is located in Cranston, Rhode Island. When you connect with Daniel and his legal team, you’ll access superb legal support which WILL make all of the difference.