What to say to a judge during DUI court 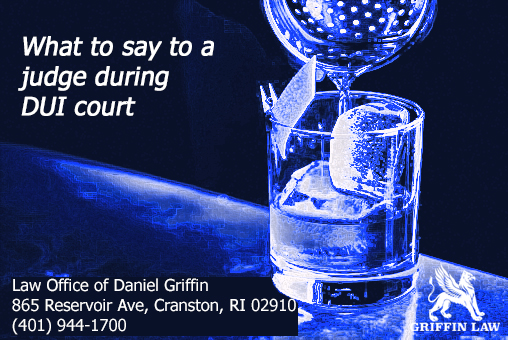 What do I say to the judge in DUI court?

You have to be sincere and apologize for driving while drunk. More importantly, explain how you won’t get a DUI in the future.

Being arrested for a DUI can be overwhelming, and you’ll eventually have your day in court. However, saying the wrong things at the wrong times can make matters worse. Because your future depends on it, knowing what to say to a judge during your trial is extremely important. Whether you are fighting for your innocence or working on a plea deal, a judge will hear your testimony and use it to determine the correct sentence. While having the help of a good RI DUI lawyer can help tremendously, preparing yourself beforehand may increase your chances of getting reduced penalties.

5 Tips on What to Say to the Judge

At sentencing, the judge will ask if you have anything you’d like to say regarding your case. Staying silent is one strategy, but it will neither hurt nor help your argument. Speaking up can change the game, but only if you say the right things.

All judges want to hear you be remorseful for what you did. Making excuses is intolerable and may make things worse. Never express being sorry for getting caught but instead, let the judge know that you are willing to take responsibility for your actions.

A trustworthy RI DUI attorney will give the judge some background information on you before or during the court proceeding. However, when you’re asked to speak, gently and carefully expound on the facts. For example, if you have a drug or alcohol problem, admit it and tell the judge you’re working to get it under control.

3. Expose the Positives of the Situation

While it may seem very difficult to think of any positives regarding being arrested for a DUI, it’s possible with a little forethought and strategy. Touch base on what you learned from your experience and talk about how you’ll refrain from making the mistake again.

4. Complete Sentencing Requirements Before Being Sentenced

If you think the judge will require drug or alcohol treatment classes as a part of your DUI sentence, take it upon yourself to sign up and complete those classes on your own. Be sure to tell about your participation during court. Not only does this reflect very positively upon you, but it may also encourage the judge to lighten your legal load.

By promising the court that you will never commit the crime again, you appear remorseful. If the message is delivered with sincerity (and especially if it’s your first offense), the judge may reduce your sentence as a result. However, it’s important to keep your promise. Whatever you say to the judge is recorded and if you get arrested for the same thing again, your promises may be disregarded or viewed as an empty plea.

Most importantly, always be genuine when speaking to a judge. Don’t fake your emotions and never appear to be above the law. It’s okay to be nervous or confused about the process. A good DUI lawyer in RI such as Attorney Dan Griffin can help you understand things better while also preparing you for your testimony.