How long does a DUI stay on your record? 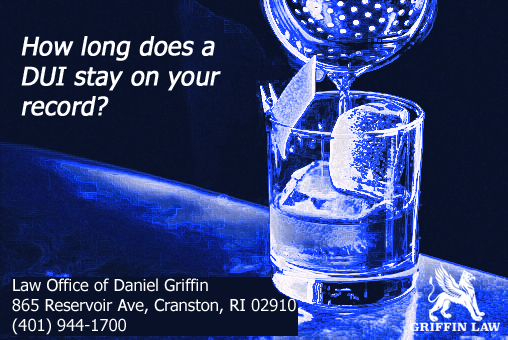 How long does a DUI stay on your record in Rhode Island?

Criminal records and a DUI

Can prior DUI convictions be used against me?

In Rhode Island, a prior conviction for a DUI will impact your sentencing for later offenses. The court can go back as far as it wants to use your criminal record against you during the sentencing process. That is why it is important to contact a Rhode Island DUI lawyer to get your record expunged.

How to check your driving record

If you are looking for driving records specifically, I suggest to obtain a copy directly from the state of Rhode Island.

To get your driving record in Rhode Island, head over to the DMV website: Rhode Island DMV Driver Records

Can a DUI Remain on a Driving Record Forever?

A lot of people mistakenly expect that a DUI conviction will naturally disappear from their driving record after a certain amount of time goes by. Many states like RI have laws that keep a DUI conviction on a person’s driving record for a set number of years (5 or 10 for Rhode Island), it is entirely possible to have a DUI on your criminal record forever. Consequently, most criminal defense lawyers encourage clients to check their driving records from time to time to see if their old DUI convictions stay. Similarly, business lawyers encourage clients to screen credit reports.

What if I wasn’t convicted for DUI?

If you went to trial and ended up not being convicted for DUI, you can begin the expungement process immediately. Contact RI DUI lawyer Daniel Griffin to clear your records and get your life back to normal.