DUI without Probable Cause: How to Fight Back 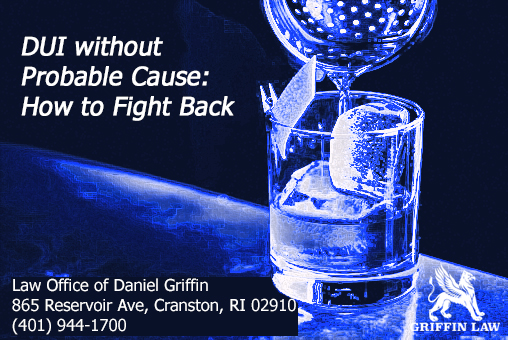 How do I fight a DUI without probable cause?

The facts of your case are probably not clear and the officer arrested you after they observed your actions. You need a lawyer.

Is my DUI justified?

Being charged with a DUI despite there being no probable cause is very frustrating. Often, the only person who can get you out of trouble is an experienced DUI lawyer in RI. Luckily, professionals like Attorney Daniel Griffin have been handling similar cases for years, giving citizens help and hope in the face of injustice.

Is a DUI without Probable Cause Really Unjust?

When you get arrested for a DUI without probable cause, the arresting officer has used their observations and discretion to give you the charges. Because fighting the charge is difficult, it’s extremely important to hire an attorney. Many citizens who get arrested under those circumstances don’t know their rights.

It’s vital that you understand your rights and obligations when you’re pulled over for suspicion of DUI. First, the police officer will need probable cause to pull you over at all. Rhode Island law states that probable cause is having enough information to support the belief that a citizen is guilty of committing a crime. Driving under the influence qualifies as probable cause, but if you’re not impaired, things can get tricky.

What Constitutes Probable Cause?

There are a few examples of circumstances and/or behaviors which qualify as lawful probable cause, including but not limited to the following:

If the officer believes your car was involved in an accident, especially one wherein a piece of property was damaged or another person was injured, he or she may have enough for probable cause. Poor conduct is also considered evidence of impairment. In many cases, the officer’s observations are a primary component in their case against you and it will be strengthened by your impolite behavior. In other words, your right to be defensive or upset is acceptable, but being cooperative is a legal strategy.

Fighting Against a DUI without Probable Cause

If you feel like you have been pulled over and/or charged with a DUI despite the existence of probable cause, don’t be afraid to fight back. There have been many examples of similar cases being thrown out because of the lack of a preponderance of evidence. However, a good DUI lawyer on your side is imperative. When pitting your own word against the word of a police officer, your claims may go unheard by the judge.

Although judges give more weight to statements made by the arresting officer, a case without sufficient probable cause may give your attorney the ability to file a motion to suppress. Remember that while police have the right to pull people over for general traffic infractions, they cannot utilize traffic stops as pretexts to launch an investigation. Such behaviors are reprehensible to the court presiding over your case, and a reputable RI DUI lawyer can help you fight the system and come out on top.

NOTE: Failing to exercise your right to fight may result in you being jailed, charged steep fines, or having your driver’s license taken away.