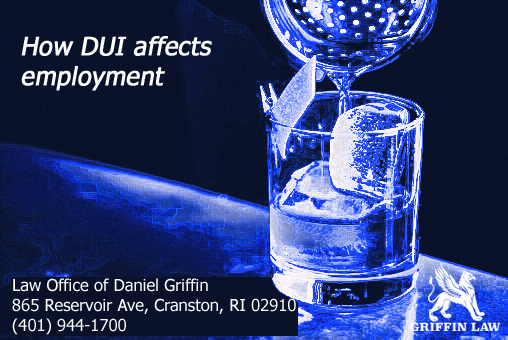 How a DUI will affect your employment

Have you been convicted on a DUI charge? Are you wondering how your conviction is going to impact your future job prospects? If so, you’re definitely not alone. Lots of people get charged with DUIs in the U.S. every single day and night. It’s best to get a drunk driving lawyer right away if you’ve been charged.

This type of legal professional may be able to help you avoid a conviction which makes it harder to move forward in life. Today, we’d like to share facts about how a DUI conviction will impact your future career in America.

You May Need to Disclose Your Conviction

If you’ve been convicted, you should know that you may need to let prospective employers know about your DUI charge when you apply for new positions. Obviously, this is something that you’re not going to like, which is all the more reason to hire a superb DUI attorney as soon as you’re taken to the police station for a Breathalyzer.

A lot of employers will ask candidates about their criminal records. They may inquire as to whether candidates have been convicted of felonies or misdemeanors. As well, they may do background checks which assist them in finding appropriate new employees.

If the position in question isn’t one where driving will be a regular part of the job, or one where sensitive material is handled regularly (or children are being dealt with), an employer might not cut you out of the competition because of your DUI. Then again, they might…

Bear in mind that a lot of states in the USA don’t allow employers to inquire about arrests. They are only allowed to ask about convictions. In certain states, it is possible to ask about specific types of arrest, so it varies. Checking the rules for your state or consulting with a drunk driving attorney will be wise. Then, you’ll know your rights in terms of what you have to disclose and what employers are permitted to ask. You won’t reveal more than you need to under the terms of the law.

In Rhode Island, if you’re applying for a job which gives you access to drugs, you’ll need to disclose drug-related arrests, whether you were convicted or not. However, you won’t need to disclose a DUI arrest. In general, we advise giving out conviction-related data only if you’re specifically asked about as you’re interviewed or via your hand-written application.

What we recommend most of all is hiring a drunk driving attorney in order to get the DUI expunged. This means getting it off your record. When you do, you’ll be freed of having to disclose it as a conviction when you apply for employment.

Sensitive Positions May Be Harder to Get

If you want to work at a job which is considered a sensitive position, it will probably be harder to get hired when you have a DUI conviction. For example, if the job requires driving, your record is likely going to be a problem. Also, if you want to teach kids or provide daycare, your DUI may be an issue. As well, the military tends to avoid candidates with DUIs.

A DUI is definitely a dark mark on a person’s record.

Get Help from a Lawyer

Instead of experiencing the setbacks which are often associated with trying to get hired after a DUI conviction, why not find the right drunk driving lawyer and get your criminal record expunged? Doing so will free you up to explore new opportunities. It’s well worth the money that you’ll pay legal counsel! It’s an investment in your future!

In terms of how to find the right RI DUI lawyer, be sure to look for an attorney who is licensed to practice law here. As well, this lawyer should have a good “win/loss” record in terms of getting records expunged for clients. We also think that it’s smart to read customer reviews of lawyers that you are interested in. Be sure to check and see if they get high ratings from the people who hire them. While reviews aren’t everything, good attorneys who get great results for this clients will likely earn accolades.

As well, you’ll need to think about the cost of legal representation. Most attorneys who work to expunge DUI records for their clients do charge by the hour and, sometimes, the cost is fairly high. The best lawyers will typically charge more for their services, due to their strong reputations. However, they will generally be worth it. Once you find one, consider paying that person to the cost of investing in your own future.

Now is the right time to search for legal counsel and try to get your criminal record for your DUI expunged. Many lawyers have gotten records expunged for their clients. While there aren’t any guarantees, it is possible and an expunged record will save you from so much stress in the future. You’ll be able to apply for most jobs with more confidence. You won’t be fretting about your DUI conviction all of the time.

Since a good lawyer is the key to getting a record expunged, why not find one today? After you do so, you’ll be ready to move forward to a brighter future. Drunk driving was a mistake and you got caught. It’s not the end of the world, but it can have negative consequences in terms of future employment. For this reason, we think that you should strongly consider hiring a Rhode Island drunk driving attorney today.

We want you to enjoy as many opportunities as possible. The key to accessing these opportunities is asking an RI lawyer to try and get your criminal record expunged. After you find superb legal representation, the odds of success will go up. Someday, you may have the expunged record that you want and you’ll be able to access almost every job opportunities, on a level playing field with other applicants.