Which is Worse: DUI or DWI? 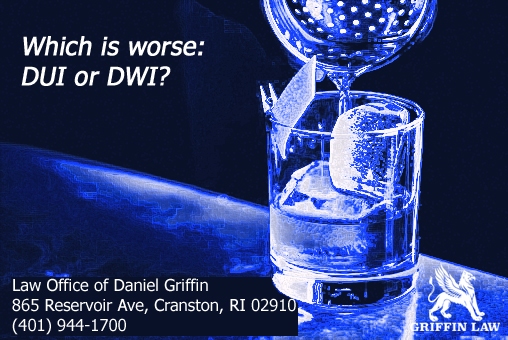 Which is worse- DUI or DWI?

The answer largely depends on where you are. Here in Rhode Island, the laws take a harder stance than elsewhere, necessitating a solid understanding of the legal situation; strongly consider consulting a Rhode Island DUI lawyer if you’ve been charged with a DUI or DWI.

Mistakes happen. Whether by neglect, carelessness, or bad intentions, winding up with a DUI or DWI is a lot easier than you might think. But which is worse, a DUI or DWI? And what’s the difference between a DUI and DWI?

The History of Drunk Driving Laws

The dawn of the 20th century brought us the first mass-produced automobiles to hit the United States. It took all of ten years for the first drunk driving law to be passed, making its way into New York law in 1910, with California quick to follow, and other states not far behind.

Of course, back then, drunk was a matter of opinion.

In the 30’s and 40’s, we started to see blood alcohol content, or BAC levels, become the standard method of quantifying inebriation. Back then, the intoxication bar was set at .15% BAC, though that would later change to .08%. But even so, discovering a driver’s BAC levels at a roadside stop was, quite frankly, a daunting question. Taking a blood sample seemed like a terrible idea.

Enter the questionably-named, and wildly imprecise “Drunkometer.” Patented in 1936, the Drunkometer involved blowing into a balloon, and a color changing chemical reaction would indicate the driver’s BAC. This suitcase-sized contraption was the primary means of analyzing BAC until the 1953 introduction of the Breathalyzer. More accurate, portable, and less embarrassing to say out loud, Brethalyzer technology has been the gold standard ever since.

Yet another evolution in the drunk driving saga came in the 1970s, with the successful lobbying efforts of the group known as Mothers Against Drunk Drivers (MADD), who spurred changes in the legal drinking age – raising it to 21 – and in lowering the acceptable level of BAC to 0.8%.

DUI or DWI?
So that leaves us with these two charges, and the difference between them. While the terms can be interchangeable in many states, in RI they have very distinct meanings.

Drivers under the age of 21 can be charged with a DUI; this occurs if they have a BAC between 0.02% and 0.08%. First offense penalties include: suspended license for 6-18 months, 10-60 hours of community service, and a $500 Highway Safety Assessment fee.

When people think of drunk driving charges in RI, this is what they usually mean. Charges can vary depending on whether it’s a first offense, if the driver is under 21, and of course, if the charge involved accident or injury.

For drivers under 18, they face the same penalties as a DUI, with the addition of mandatory participation in a DWI course, as well as drug and alcohol treatment. For drivers 21 or older, a first offense will net them a $100-$300 fine, an additional fee of $86, a suspended license for anywhere from 30 to 180 days, up to a year of jail time, as well as 10-60 hours of community service, and the aforementioned alcohol/drug treatment and DWI class.

In either case, you’re going to want an RI drunk driving lawyer. Even so, you don’t have to be an RI DUI lawyer to understand your rights, and the dangers associated with drunk driving charges. For that, read on.

Driving Under the Influence

In many states, a DUI is the primary charge for drunk driving, although DWI, OWI, and several other acronyms find themselves in use. Whatever it’s called, the elements of a DUI charge are fundamentally the same across the board – a driver is believed to have chemicals in their system that could potentially impair their ability to operate a motor vehicle.

In states that use both the DUI and DWI definitions, the DUI is usually the lesser of the two charges. After all, it’s less damaging to be under an influence, than it is to be intoxicated, though the degree of impairment matters from state to state. In Colorado, for example, the prosecution doesn’t need to prove that a driver was meaningfully affected, just that they were impaired to “the slightest degree,” whereas in California, that same prosecutor would need to show that the driver was affected to the point where they couldn’t show the same attention and care that a sober driver could have.

In RI, a driver doesn’t need to be drunk, per se, just impaired to the point of affecting their reflexes. Furthermore, unlike other states, an RI driver can be pulled over for drunk driving anywhere in the state; they don’t need to be on a public road, a parking lot could do just as well.

So You’ve Been Pulled Over. Now What?

In Rhode Island, when someone is pulled over under suspicion of drunk driving, the officers are likely to deploy a series of field sobriety tests, in order to determine if the driver is actually intoxicated or not. Rhode Island also employs preliminary breath tests, or PBTs. These tests aren’t mandatory; the driver can refuse them, although they’ll be subject to a fine for doing so.

Technically speaking, neither of these tests is mandatory – a driver is within their rights when refusing to take them. This, however, forces the officers’ hand to a degree. Barring the field sobriety tests, officers are still are within their rights to arrest drivers who refuse to take a field sobriety test, at which point, they will ask the driver to submit to a chemical test. While most Rhode Island police departments use a breath test, the police are also able to administer a urine or blood test as well.

Under RI law, a driver can refuse any of these tests. However, they will then be subject to an administrative – not criminal – penalty. First time offenders are looking at a minimum fine of $200, a “highway assessment fee” of $500, a Department of Health assessment fee of $200, as well as losing their license for 6-12 months, and 10-60 hours of community service.

A DUI or DWI Charge Isn’t The End

While it can be a difficult, time a drunk driving charge isn’t the end of the world. It is, however, absolutely the time to Lawyer Up. And the Law Office of Daniel Griffin can help you get back on track.