16 Of The Weirdest And Craziest Christmas Crimes 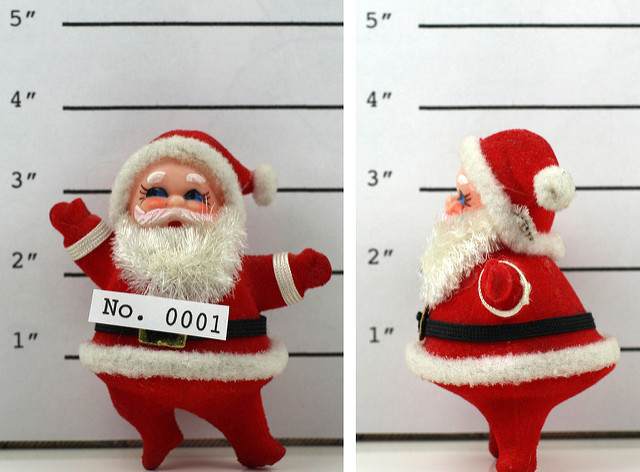 The Christmas spirit is in the air with the biggest holiday of the year right around the corner. People hustle and bustle, grabbing gifts of all sorts for their friends, loved ones, and co-workers. The scent of Christmas cookies fills the house and the chill from the air is remedied by the immediate warmth felt by the wood fireplace. Houses are decorated inside and out, giving you that extra feeling of coziness. It is a little bit easier to be happier and nicer during this time of year- except for those who landed on the naughty list. Here are 16 of the weirdest and craziest crimes during the Christmas season that will land you on the naughty list.

Two UMass students went full-on ZooMass and tried to get away with stealing a Christmas tree the Boy Scouts were selling to raise money for local troops. They were apparently put up to this by a dare from a third party. Their charges included larceny and a $250 fine.

2.) Actually Stealing Cute Puppies, Instead Of Just Saying You Want To

You know when you walk by a cute dog and think to yourself “IT IS SO FLUFFY I WANNA STEAL IT”… well this guy actually had the guts to carry it out- except he broke into a home in the process. It is a bit of a “chicken and egg” situation. What came first: the puppies, or the home invasion? Surely, if he saw the puppies first, then we have to wonder jut how cute these little things were if it drove him to commit home invasion.

3.) No Beer? Prepared To Be Stabbed By A Ceramic Squirrel

Some folks like to imbibe the holiday spirit a bit too much. A woman in South Carolina stabbed a man on Christmas for coming home without beer. Yes, you read that right. When officers confronted her, she tried to say he slipped and fell, but couldn’t explain her bloody hands and clothes. She was charged with criminal domestic violence. Side note: somewhere in South Carolina, there could be a bloody ceramic squirrel sitting inside an evidence bag. What a sight.

4.) Getting Stuck Inside A Chimney Naked

A man nicknamed “The Santa Claus Burglar” was stuck in a chimney for 6 hours while trying to escape the scene. Seattle firefighters pulled the naked (yes, naked- for unclear reasons) man from the chimney after a neighbor reported someone screaming for help. The man claimed his friend, who presumably was also on the roof with him, tossed his backpack into the chimney and he was trying to retrieve it. Apparently his clothes also burned up somewhere in the mix. He was charged with residential burglary and a 17-month jail sentence.

It is safe to say that people associate snow with Christmas (at least up here in New England), and there is something special about that bright and soft white powder being a part of it. In this case, Santa brought snow alright- but the “snow” was actually cocaine. Police in Rio de Janeiro found Santa dolls filled with cocaine and ornaments filled with marijuana.

This man from the Greater New Orleans area stole 3 snakes and a cash register from a local pet store. He claimed the snakes were a Christmas present for his son. A Ball Python and two Boa snakes, in addition to the cash register were missing when the owner opened up for business that day. He was charged with simple burglary.

You either love or hate the drunken tradition of Santacon, where a bunch of drunken Santas troll the streets of numerous cities in a massive pub crawl. During this drunken revelry, one Santa decided to con (see what I did there) the bank and make off with an undisclosed amount of cash. He then disappeared into the crowd of people dressed exactly like him. Local business should actually take that fact into account because it is an advantage would-be thieves during these types of events can exploit. I imagine the best way to spot this guy is to look for the Santa buying the whole crowd of Santas a shot.

Here is the situation: Two men in Walmart. Man 1 fakes a heart attack in front of the security guards to create a diversion. Man 2 uses this diversion to make it out the front door with $369 worth of toys. Once Man 2 leaves, Man 1 suddenly feels OK and leaves in the same car with Man 2. I wonder if they actually thought people would buy this?

A woman boasted to her neighbors that she had the best Christmas tree in the world. That “Christmas tree” was actually a giant marijuana plant. Police in Chile found 21 cannabis plants, 29 bags of other drugs, and 2 shotguns in the woman’s house. Apparently the authorities had been investigating her for a month, but didn’t actually expect to find a marijuana plant being used as a Christmas tree (who would?).

The parking lot is arguably the most vicious place within the proximity of shopping centers across the world before Christmas. You know the feeling you get when that precious space close to the door opens up after 10 minutes of driving around. Your heart rate increases, you start sweating, and go into immediate stalk-and-defend mode as you try to dirty-look and honk at that person trying to steal your spot. Police in Connecticut charged 3 women with breach of peace after a brawl broke out in the parking lot. The first move? An orange peel was launched at one car from another.

11.) DUI While Driving A Christmas Float

A man was charged with DUI and 18 counts of kidnapping and assaulting an officer after he was arrested during a South Carolina Christmas parade. He was driving a float full of children and adults from a local dance studio while drunk. At one point during the parade, he pulled out to pass the truck in front of him, and sped down Main St. for 3 miles, running a red light in the process.

12.) When You Just Didn’t Get What You Wanted

A couple was given a no-contact order after assaulting each other over an unappreciated Christmas gift in New Hampshire. The boyfriend complained about getting a Wii system instead of the remote control plane he asked for. When his girlfriend decided, to leave, he grabbed her hair and she turned around and hit him.

A man dressed as Santa attacked a 74 year old woman with a 2 by 4 plank at a mall in Atlanta. There didn’t seem to be a motive and he also threatened other bystanders with the plank in case they tried to intervene. He was charged with 2 counts of aggravated assault.

A man high on bath salts broke in to a house in Ohio and started to decorate. An 11 year old boy found the man decorating and playing with his toys when he called his mother who was at the neighbors house. The man reportedly lit candles and hung a wreath on the garage door while watching TV. He was arrested and charged with burglary.

Next time you think about stealing that baby Jesus from the local church, think again because it could be implanted with a GPS device. A woman was arrested in Florida on theft of the baby Jesus after GPS tracked it down. This is supposedly a fairly common crime during the season, and a number of churches have started to use GPS and camera systems to deter/locate thieves.

While most of us dream of a white Christmas, this guy from California was dreaming of a green Christmas. He allegedly packaged and handed out marijuana in napkins to customers at a Buffalo Wild Wings in Monterey. He approached customers while they were eating and told them Santa had a gift for them. When police searched him, they found over 2 pounds of pre-packaged marijuana. He was arrested for “furnishing marijuana.”